The composers of IMAscore did a splendid job on the music, the sound design and everything you can hear. They helped us write the lyrics for all of mina’s songs as well as creating an amazing scoring. Coming from Paderborn, they even visited us in the capital, Berlin, for the song recording, several times. Of course they also did the gorgeous sound design for the radio play and in-app-sounds. A really big task, because for that they needed to remaster the voice recordings and make them fit into the story atmosphere. In the past they’ve been priced as “Kultur und Kreativpiloten Deutschlands”, a german award standing for innovative creativity and culture. The members of IMAscore are all professionals. the perfect partner to create something unique with a very high standard of quality. 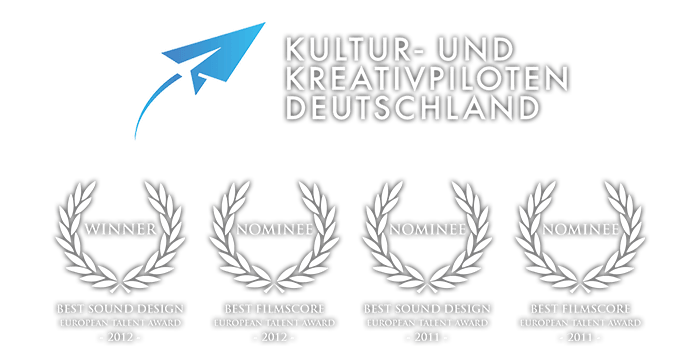 Andreas Kübler composed not only the emotional ballad “A Feeling” and its big and even more touching reprise, he has also done an excellent job on “Fly My Birdie”

>> Mina’s Adventures not only is a simple radio play, it’s much more than that. All the songs needs to perfectly fit the lovely characters and the breathtaking story line. It felt amazing to work with that any talented and great singers! <<

Andreas was director of the song recordings, too. Therefore he had to work with the singers on our songs and get every note where it belongs in the song. A job that needs to be done, when you want to achieve the ideal sound of the songs

Sebastian Kübler Is winner of the European Talent Award. He was responsible for the sound design in Mina’s Adventure.

>> Every yet so little Sound is more than important for the authenticity of the whole radio play. Having no image, proper sounds are fundamental to leave not only a good impression, but to make the listener feel, what happens. Still there is a fine line between overpowering the radio play with sounds that are all over the place and to let room for the phantasy of every child that listens to Mina.<<

Sebastian also wrote the song “Till The End”, as well as he composed the intro and ending of our radio play.

Xaver Willebrand wrote the lyrics of every song in both german and english language.

>> It’s totally different than to write lyrics for pop songs for example. Each song in Mina’s Adventure needs to be on point, ’cause these musical songs are part of a story, part of the personality of every character. My job was to write down what the actual character would sing in a particular situation.<<

Florian Wunsch composed big parts of the scoring, which is basically the music that comes along with the radio play all the time. Florian was responsible for the main theme of Mina’s Adventure. You can also hear it in the song “Fly My Birdie”

>> Without seeing what actually happens, music needs to guide you emotions through the whole radio play. Working on Mina’s Adventure was an exciting adventure itself, because it held that many possibilities to surprise the listener in a musical way.<<

Eric Krause helped florian creating the scoring and composed “No One Is Better”, one of the most complex songs of the radio play.

>> Never before i have composed songs for musicals and believe me, this songs was one of a kind. You have 5 different characters, separated in two groups. A fight between good and bad with a small word fight in the beginning. It was a relieve when everything got together and sounded well. The perfect outcome.<<